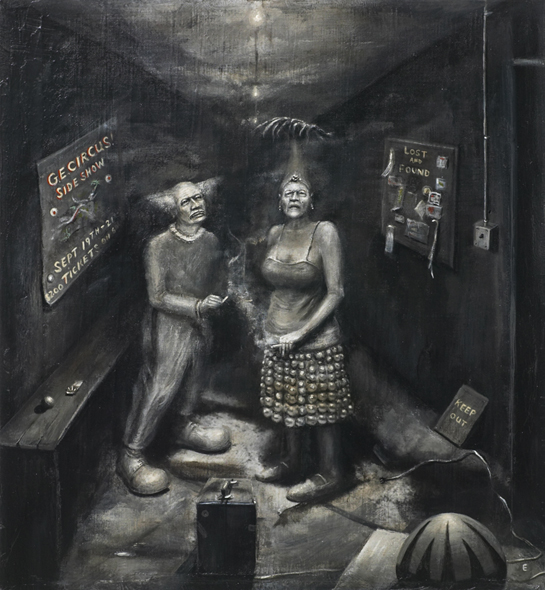 In 2005, Elizabeth Ernst introduced Chicagoans to The G.E. Circus – a cast of circus characters she sculpted with polymer clay, photographed, printed on black & white linen paper, and then finished with acrylic paint. Once complete, she wrote their biographies which were hung alongside each piece, giving voice to her imagined entertainers. The show combined her love for storytelling, sculpture, painting and photography, addressing various social issues associated with the circus.

Five years later, Ernst presents Smoke & Mirrors, a continuation of her deep commitment to the people who work in the circus. In her newest works, Ernst photographs figures she created from clay and scrap metal, and combines them with images she took at traveling circuses, going behind the tents and inside the trailers to reveal the lives behind the faces who entertain the public.

Whether real or imagined, Elizabeth Ernst creates a world which relies on disbelief and

suspended reality. Behind the make-up and costumes are real people whose lives often belie the people they portray. It is this duality – the public persona vs the private persona – that Smoke & Mirrors examines, reminding us that people usually reveal what they want us to know, and often the truth lies elsewhere.

Opening Reception with the artist:
Friday, November 5th from 5 – 8 pm

Artist talk in the gallery, Saturday November 6 at Noon

One thought on “Studio visit with Elizabeth Ernst”