Today is your second to last day to visit Photo London! The fair today begins at noon and ends at 7:30 pm (19:30). So even if your weekend plans include watching the royal wedding, you’ll still have time to visit. We are thrilled to be featuring the work of eight photographers at booth G15, two of which you can read about below.

Born in Madrid, Spain, Daniel Beltrá is a photographer based in Seattle, Washington. His passion for conservation is evident in images of our environment that are evocatively poignant. His striking, large-scale photographs are shot from the air. This perspective gives the viewer a wider context to the beauty and destruction he witnesses, as well as revealing a delicate sense of scale. After two months of photographing the Deepwater Horizon Gulf Oil Spill, he produced many visually arresting images of the man-made disaster. His SPILL exhibit premiered in August 2010 and has toured around the globe since then.

Over the past two decades, Beltrá’s work has taken him to all seven continents, including several expeditions to the Brazilian Amazon, the Arctic, the Southern Oceans and the Patagonian ice fields. For his work on the Gulf Oil Spill, in 2011 he received the Wildlife Photographer of the Year Award , the Lucie Award for the International Photographer of the Year – Deeper Perspective, and was chosen as one of the six finalists for Critical Mass for Photolucida. In 2009, Beltrá received the prestigious Prince’s Rainforest Project award granted by Prince Charles. Other highlights include the BBVA Foundation award in 2013 and the inaugural “Global Vision Award” from the Pictures of the Year International in 2008. In 2007 and again in 2018, he received awards for his work in the Amazon from World Press Photo. Daniel’s work has been published by the most prominent international publications including The New Yorker, Time, Newsweek, The New York Times, Le Monde, and El Pais, amongst many others.

Daniel Beltrá is a fellow and board member of the prestigious International League of Conservation Photographers. 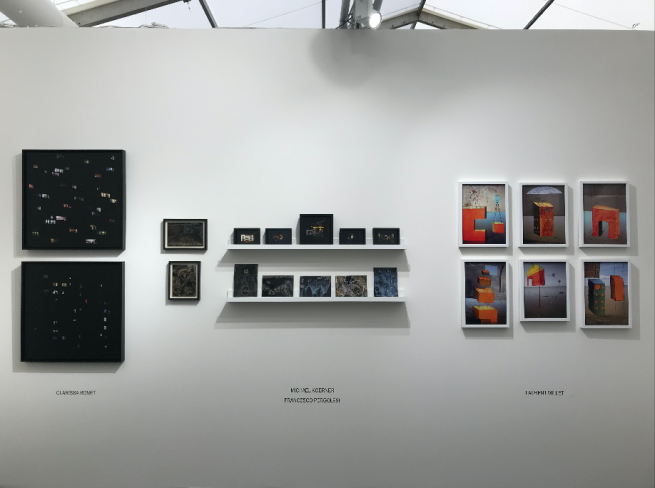 For more than twenty years, Laurent Millet has channeled his innate curiosity to create photographs that question the way objects appear within space and time. Citing R. Buckminster Fuller and Denis Diderot among his influences, Millet creates an artistic vocabulary through metal wire, vineyard posts and barrel hoops – objects prevalent in the coastal town of France in which he resides. There is a rich history of artists constructing environments simply to be photographed and then disassembled. These created realities were prevalent in the 1980s, as works by Sandy Skoglund, Bernard Faucon, Bruce Charlesworth, James Welling and other artists burst onto the scene. All of these artists worked with objects to create a narrative, captured by the camera. Laurent Millet (b. 1968 France) continues to work in this tradition, using various 19th c. printing techniques to magnify his vision.

As he stated in a 2014 interview in L’Oeil de la Photographie: “I felt like I had to take refuge in something that was comforting and reassuring… This idea brought me back to what I did as a child in the countryside when I would play with wood and stones. I rediscovered that pleasure as an adult… Starting with the first things I built, fishing machines, I felt like a world was opening up in which I could really exist. These objects are powered by my personal fictions, my dream of another life. The photograph is proof of that, a record of the moment, a reward.”

Follow along with us this week on Cyclopsblog, Twitter, Instagram, and Facebook for highlights and behind-the-scenes images from London! Plan your visit to the fair here, and be sure to visit booth G15! Stateside viewers can also see the booth in full on our website here.