Catherine Edelman Gallery is excited to announce our newest represented artist, Garrett O. Hansen! You may recall seeing Garrett’s Chicago-specific work titled Memorial, as well as his Silhouettes series of laser-cut mirrors in our summer 2017 exhibition, Targeted. Garrett O. Hansen (b. 1979, NYC) graduated from Grinnell College, where he studied economics and political science. He completed his MFA in photography at Indiana University and has taught at several universities in the United States and in Asia; he is now an Assistant Professor of Photography at the University of Kentucky. Garrett has had numerous solo and group exhibitions in the United States, Europe, Indonesia, and Japan.

“Roughly 40% of US households have a gun and there are enough guns – approximately 300 million – to arm nearly every man, woman, and child in the country.” 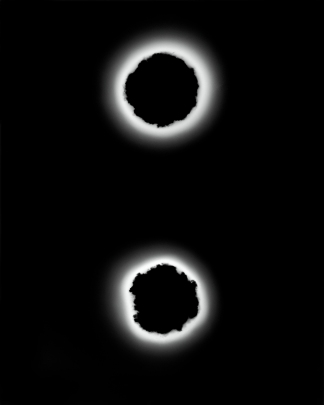 At the core of The Void series is a desire to consider these facts and to create a set of images that speaks to their implications. Each of the images is created from individual bullet holes. While shooting is fundamentally a destructive act, by bringing these holes into the darkroom, enlarging them and then processing and printing the results, the artist is able to balance this destruction with creation. The viewer is presented with images that speak to the sublime – they are both attractive and terrifying at the same time. In many ways this reflects our own opinions of guns in America, a country where the debate between rights and controls continues to rage. 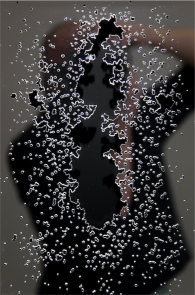 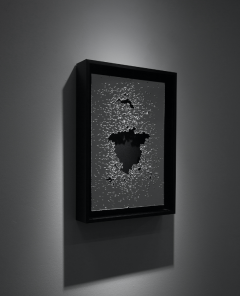 While The Void series deals with the power of the single bullet, the Silhouette series engages the broader culture of guns in America. Garrett visits a local gun range and collect the cardboard backings that are used behind their standard target. The targets depict an unarmed man’s silhouette, a highly common target throughout civilian and police gun ranges. Each shooter is presented with a fresh target, while the backings slowly erode from the thousands of rounds shot at the unarmed man. The groupings that one most often sees are in the chest and head areas. The artist collects the pieces of cardboard and bring them into the darkroom, where he makes full sized contact prints of them.  These prints are then scanned and form the basis for the final pieces. The final pieces are made of mirrored plexiglass and are one-to-one replicas of the original cardboard backings. As viewers approach the piece, they see their own reflections hollowed out by the countless bullets. 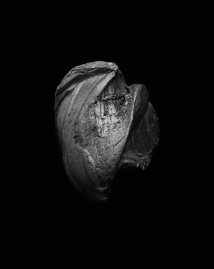 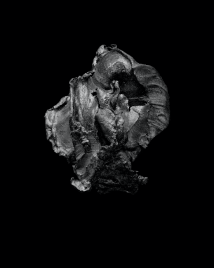 The third component to this ongoing project is comprised of bullets that have been collected from gun ranges. Each bullet, sculpted by impact with a ballistic steel wall, takes on a dramatic new form. The contorted shapes speak to the inherent violence in shooting and the transformation of each fired bullet from a sleek projectile into a twisted shard of lead. As with The Void series, this work deals with the complex connections between destruction and creation. 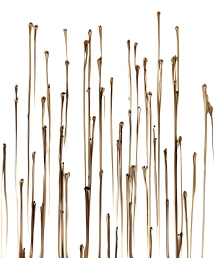 The latest component to this ongoing series is entitled Memorial. Each piece documents gun deaths in a particular place and for a particular length of time. The first incarnation of this work entitled Memorial – Kentucky, 2016 is comprised of twelve panels. Each panel represents a single month in Kentucky and records every homicide involving a gun that occurred during that month. This work acknowledges and lays bare the heavy price of having a heavily armed civilian population.

You can read an in-depth article about Garrett from the The Trace in conjunction with Targeted, and watch Catherine speak with Garrett in his July 2017 Artist Talk below.