We are excited to introduce The Chicago Project Artist, Garrett Baumer!

Shortly after graduating Baumer became the artist in residence in digital arts/photography at the Lillstreet Art Center in Chicago, where he is also an instructor. Recently his body of work, Restricted Access, has been featured in the summer issue of PDN’s Emerging photographer.  In June 2015 Baumer attended Review Santa Fe and in October will have a solo show in the Emergence Exhibition at The Union League Club of Chicago.

Garrett Baumer’s photographs play with perception. At first glance you ask yourself, does this place exist? Is this a secret government bunker, missile silo, or some kind of command center? In actuality, they are carefully built scenes made from led lights, paint, foam core, strobes, wire, and more.

I like how quite a photograph can be, how it can make one feel slightly uneasy without saying anything actually happening. – Garrett Baumer

I envision a not too distant future when the people responsible for our own security fail with ill-fated results. This can be the breakdown of an already fragile infrastructure, the anxiety of preparing for our own defense, or the fear of coping with the aftermath of a tragic event. Based on these speculations a visual mythology of rarely seen places that are designed to monitor, control and respond to unfortunate events are created. I harvest these observations, analyzing how spaces can be transformed due to a high level of security or incidents of alarm and emergency. The act of being denied access to a place or the knowledge that a rare tragedy occurred only creates intrigue.  The moment when intrigue and the denial of information cross paths a mythology is born.

My image creation is heavily influenced by architecture that is strictly utilitarian. I look at how structures are built for security and privacy, then exaggerate those design elements. To dramatize the unseen I fabricate these scenarios through building 3D sets, placing the viewer in a strange mental space; caught between the photographic reality of the material and the alternate reality the space creates as a whole.

Select images from Garrett Baumer’s Restricted Access series are on view in our current exhibition, The Chicago Project VI: Selections from our Online Gallery running through August 29th. 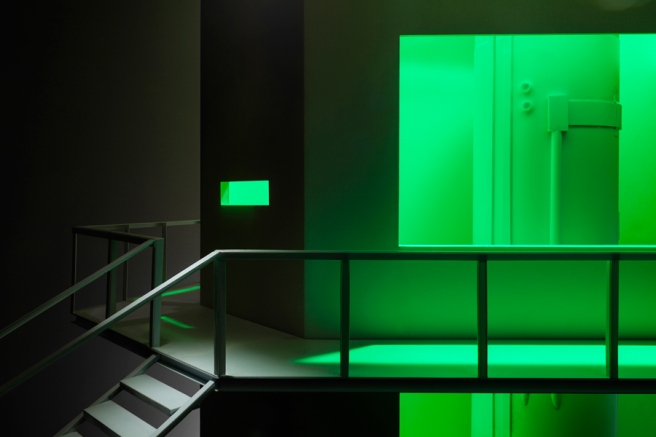